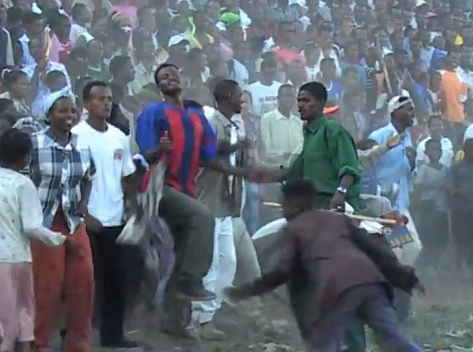 (Maastricht / Brusselsestraat 22)
In Dance! (2010) we are made to feel like witnesses of a big demonstration somewhere in Africa. We watch orderlies, who try to control the crowd with sticks. In the work of Matthijs Blonk (The Netherlands, 1952) – winner of the One Minute Dance Film 2010 – the camera follows a tall man dressed in a red and blue soccer shirt. He dances for the whole short film; forwards, backwards, sometimes directing, sometimes following the crowd. The crowd is happy, the dancing is contagious and hypnotising. The urge to dance is great – the orderlies struggle to contain the crowd with their sticks. Dance! was recorded during the Festival of a Thousand Stars in south-western Ethiopia, a region where several small tribes live, not usually in harmony. Because of famine, the tribes fight each other with cattle raids and battle over wells. In order to get to know each other better, the government has organised a festival where about fifty tribes can present their music and dance. The festival is a success, but the underlying tension remains visible and tangible; not least because of the military with their automatic rifles in the fore- and background.