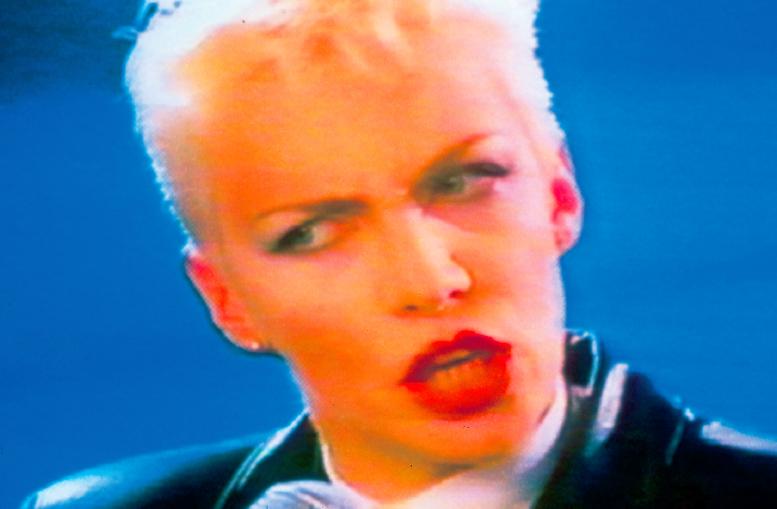 (Heerlen / Dr. Poelstraat 8)
The series Four Duets by Candice Breitz (1972), revisits a number of the most popular and sentimental pop songs from the 70s, 80s and 90s: songs by female artists Karen Carpenter, Olivia Newton-John, Whitney Houston, and Annie Lennox. Paraphrasing Babel shows Double Annie (Thorn In My Side). Breitz’s re-edit of the song, reinforces the inescapable desire for love that it conveys. Double Annie reduces the Eurythmic’s Thorn In My Side to nothing more than a series of personal pronouns. The personal pronouns in the song are collected and strung together to create two new loops, setting a jerky melody of “Me/My/I” opposite a loop composed from each “You” extracted from the song. A somewhat minimal and schizophrenic dialogue ensues. Although the duet has a humorous dimension, it also hints at the affliction at the core of the love song, a tension between wanting and being wanted. The duet also evokes the relationship of longing that exists between the star and her fan. The latter can identify with the singer as an ‘I’, but is at the same time confronted and addressed as a ‘You.’ In the installation of the two opposing loops, the singer addresses herself in a circular manner, locked in a somewhat autistic backand- forth performance of desire, amidst which little room is left for the fan. Another work by Candice Breitz – titled A-B-B-A – is shown in The Office Villa of the Timmerfabriek, Boschstraat 9.